On the occasion of the 300th birthday of Frederick II, the Berlin-Brandenburg Academy of Sciences and Humanities (BBAW) has put online the minutes of the plenary sessions ("Registres") from 1746 to 1786 of the Académie Royale des Sciences et Belles-Lettres de Prusse, which was transformed by the Prussian king. The presentation is a joint project of the archive, the library and the Telota Initiative of the BBAW. 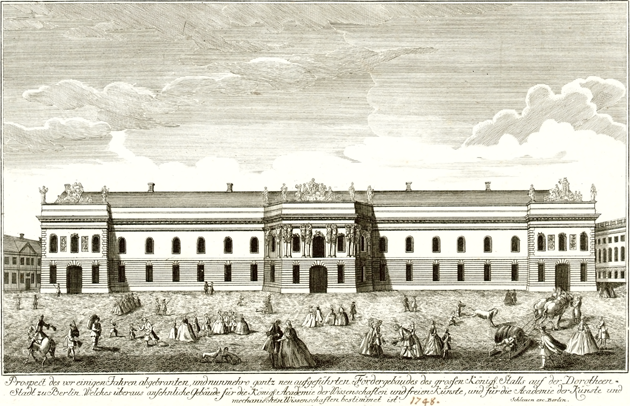 When Frederick II took over the regency of Prussia in 1740, the Academy was in a desolate state. It had struggled for its existence for several decades, yet there are various reasons why it was successful. On the one hand, Leibniz’s academy concept corresponded to the prevailing requirements of the sciences in those times. For another, it was beneficial to the state because it published various calendars and was financially independent of the state treasury. And finally, it was not only closely linked to the Berlin scientific institutions, but also fulfilled the King's expectations of efficiency by appointing suitable scientists.

The new King was aware of the importance of science for the Prussian state and initiated changes immediately after taking office. He invited the famous mathematician and philosopher Christian Wolff, whom his father Frederick William I had banished from Prussia, as well as the French natural scientist and mathematician Pierre-Louis Moreau de Maupertuis, who was the President of the Academy from 1746 until his death in 1759, the Leiden philosopher and mathematician Wilhelm Jacob van's Gravesande, the writer and natural scientist Francesco Count von Algarotti from Italy, who had already been one of Frederick's friends in Rheinsberg, and finally the mathematician Leonhard Euler.

But not all of them followed the King’s call. Nevertheless, Frederick could shortly afterwards write to Voltaire, who had become a member of the Academy in 1746: "I have laid the foundations of our new Academy." In 1743, in addition to the Society of Sciences, the ‘Nouvelle Société Littéraire’ was founded in Berlin, and many Academy members belonged to it. Following the wish of Frederick II, the two societies were united in 1744 to form the Royal Academy of Sciences.

After Maupertuis took over the presidency in 1746, the Academy received a new statute and was renamed Académie Royale des Sciences et Belles-Lettres. Its four classes remained unchanged. In the statute of 24 January 1744, the German and the ecclesiastical-oriental classes had already been replaced by a philosophical class (metaphysics, morals, natural law, history and criticism of philosophy) and a philological class (literature, history, languages, antiquities, inscriptions and medals). Regular attendance by Ordinary Members at plenary sessions was obligatory. Publications were to appear in French. The President had great freedom in financial and appointment matters, which Maupertuis also took advantage of. After his death in 1759, the King did not appoint a successor, but kept on seeing himself as the “protecteur” of the Academy. He had d'Alembert advise him until 1783 and promoted the Academy according to his own scientific understanding. Thus, he had already decided in 1744 that the academic society in Berlin should set prize-winning tasks, following the example of other academies.

The Academy, which was French-influenced both in its language and style, had only limited French esprit, however. After a 30-year period of prosperity, it no longer kept pace with the progress of the French Enlightenment. The royal treatise "De la littérature allemande" of 1780 shows how little Frederick II was familiar with German intellectual and cultural life - at the very beginning of its self-confident development in Berlin.

The Academy aged with the king. In the last 15 years of his reign, only ten new appointments were made. The King often rejected proposals from the ranks of the Academy members. In 1771, for example, he rejected the appointment of Moses Mendelssohn. By the time of his death in 1786, the Academy had only 18 Ordinary Members (OM), instead of the 24 provided for in the statutes. In the early 1750s, the number of External Members (EM) was still 140. Until 1786, it had fallen to 64. At this time, the Academy owed its good reputation primarily to medical doctors, mathematicians, geologists, chemists and botanists, most of whom found a well-equipped institutional basis for their research in the facilities affiliated to the Academy (Observatory, Botanical Garden, Chemical Laboratory, Collegium Medico-Chirurgicum).

The natural science classes played quite an important role within the framework of the "Pﬂege der praktischen Wissenschaften" [maintenance of practical sciences] decreed by the King in 1744. On behalf of the General Directorate, the highest Prussian government authority, the Academy even assumed the tasks of an examination institute. These tasks included providing scientific support for royal commissions, carrying out calculations, preparing expert opinions, e.g., on inventions, company foundations and machinery, solving concrete agricultural or technical problems (as evidenced in several prize-winning tasks), but also evaluating information obtained from abroad.

After the death of Frederick II in 1786, a dispute began over the reorganisation of the Academy that lasted a quarter of a century. 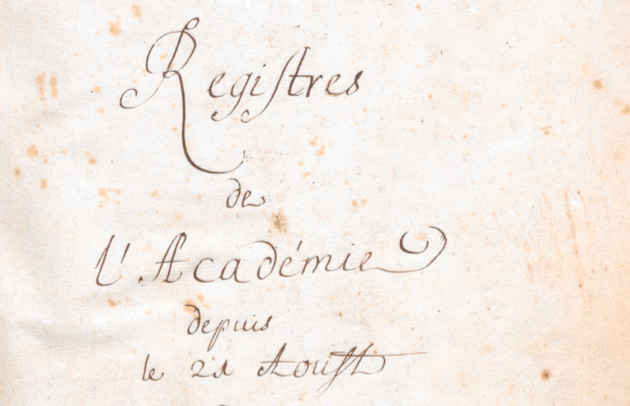 Minutes of the Academy meetings (Registres)

The statutes of the Berlin Academy of Sciences issued by Frederick II on 10 May 1746 provided for weekly plenary sessions to be held on Thursdays. The Permanent (i.e., lifelong) Academy Secretary was responsible for taking the minutes of these Academy meetings. From the plenary session on 2 June 1746, Johann Heinrich Samuel Formey continuously kept the minutes of the reorganised Academy, although, at that time, he was only acting as Deputy Secretary (secrétaire adjoint). It was not until the plenary session on 9 May 1748 that Formey assumed the function of Permanent Secretary of the Academy, a position he held until his death on 8 March 1797. In instances where Formey was absent from the meetings of the Academy, Johann Bernhard Merian, Director of the Classe de Belles-Lettres, took over the secretarial duties. Formey then wrote the corresponding minutes afterwards.

The last Academy meeting during the reign of Frederick II took place on 20 July 1786. The King died on 17 August during the Academy's summer recess at Sanssouci Palace. His death was reason enough for Academy Secretary Formey to start a new volume of minutes with the first meeting minutes after the summer recess on 24 August 1786.

Notes on the principles of editing

From the commendable publication of the plenary session minutes of the Frederician Academy from the period 1746 to 1766, edited by Eduard Winter, only the pure text corpus of the session minutes was used for the internet presentation and linked to the digital image copies of the original minutes. The full text of the minutes was recorded according to the TEI (Text Encoding Initiative) guidelines. Online presence of the meeting minutes is facilitated through the use of the SADE framework, which allows the automatic generation of HTML pages from the XML texts.

In the preface and the first section of Winter's introduction, there are some statements that need correction. For example, the statement that the minutes of the meetings were discontinued soon after Leonhard Euler's departure from Berlin in 1766, is inaccurate. The statement in the introduction that the "Registres" are only excerpts from the much more extensive but no longer existing minutes, cannot be substantiated in any way. In fact, these are the plenary session minutes of the Berlin Académie Royale des Sciences et Belles-Lettres from the period 1746-1811, which fortunately have been preserved in their entirety - a top-ranking archival source for the national as well as European history of academies and science.

Eduard Winter's editing instructions were generally also taken into account for the internet presentation of the meeting minutes from the period 1766-1786, so that all preserved meeting minutes from the years 1746-1786 have a uniform format. Accordingly, the text of the minutes kept by Formey is reproduced to the detail of the letter. This also applies to the missing or incorrect accentuation in the original French text. The abbreviations frequently used by Formey have also been retained with the exception of the double letter "m". The Academy Secretary also had the habit of using different abbreviations for the same word. A detailed list that explains all the abbreviations is available here: List of Abbreviations. The horizontal dash or hyphen, commonly used by Formey to indicate the repetition of people's names in the attendance lists, has been tacitly dissolved. One or more dashes indicating the repetition of whole phrases have been systematically replaced by an item in square brackets. E. Winter used italics in his transcription to indicate Formey's frequent underlining of text passages. In the case of the minutes of meetings from the period 1766 to 1786, these underlinings have been retained as such in the transcription. Missing underlining of member categories in the attendance lists has been tacitly added. Where Formey's text was obviously misspelled, the correction was added in square brackets. In some cases, Formey misstated the date of the Academy meetings. Again, the correct date appears in square brackets in the transcription. In the transcription, the minutes of the meetings are consistently reproduced in their chronological order, even if in some cases, this does not correspond to the order of the originals.

A large part of the scientific lectures and reports delivered at the Academy meetings have been published in the papers of the Frederician Academy of Sciences. Since, naturally, there was a gap of usually two years between the year under review and the year of publication of the Academy papers, it was quite possible for Academy lectures to appear in the papers of a previous year under review, although they had only been delivered in the following year. Thus, the treatise "Mémoires pour servir à l'histoire de Brandebourg", written by Frederick II and read by his secretary Darget at the Academy meeting on 1 June 1747, already appears in the Academy papers of 1746.

The handwritten transcription of the meeting minutes from 21 August 1766 to 20 July 1786, the list of abbreviations and the collation were provided by Wolfgang Knobloch. Sylvia Rachuj was responsible for the computer entries. The image digitisations of the minutes of the meetings were prepared by Diana Schmeißer.

Resulting from the project "Digitalisierung der Akademieschriften und Schriften zur Geschichte der Königlich-Preußischen Akademie der Wissenschaften (1700-1900)” [Digitisation of the Academy Publications and Publications on the History of the Royal Prussian Academy of Sciences and Humanities (1700-1900)], funded by the German Research Foundation (DFG), the scripts of the Frederician Academy were already available in digital form. Initiated in 1999 by the then head of the Academy Library, Steffen Wawra, and completed in 2002, the aim of this project was to make all the publication series published in the first 200 years of the Academy's existence available to scientific research in the form of image scans in Open Access. These include the series which are relevant for the present edition, "Histoire de l'Académie Royale des Sciences et des Belles-Lettres de Berlin" (1745-1769) and "Nouveaux Mémoires de l'Académie Royale des Sciences et Belles-Lettres" (1770-1786).

Seminar participants in the course "Structures and Technologies for Digital Editions" of the Master's programme in Edition Studies at the Free University of Berlin ("FU Berlin"), winter semester 2010/11, provided fruitful notes on remarkable phenomena in the minutes. Lena Gainulina, Sarah Bianco, Elise Walther, Annika Blohm as well as Martin Fechner, Stefan Dumont and Nora Unger meticulously marked out the individual minutes. Annika Blohm developed the design of the pages.

The conception and overall coordination of the online publication was in the hands of an initiative group comprising Vera Enke, Wolfgang Knobloch, Wolf-Hagen Krauth, Markus Schnöpf and Stefan Wiederkehr.